As an instructor my first aim is to facilitate a Socratic dialogue that lasts a whole semester. I want this dialogue not only to be between us, but also engage with voices of the philosophical past as we connect our inquiry with questions of the present.  While I never leave my students with answers, I remain dedicated to helping them access philosophy as a discipline in which gaining clarity – even if it only leads to more questions – is its own reward.

I love teaching philosophy.  I’ve included below some anonymous comments on my teaching.  Also, I’ve included syllabi and course descriptions on a range of topics.  Finally, I have at the end a list of the courses I’ve taught, as well as a reference regarding a certificate and training that I’ve completed.

“Alex is just an awesome professor and if I didn’t take this class with him, it probably would have sucked.”

“This class was fun and engaging and Alex was an amazing professor. Class was never dull and he made everyone engaged and wanting to participate. I loved the connections to modern film and writings and how we looked at everything through the lens of the critical philosophical writers. Also, Alex explained everything very well and his charts were amazing.”

“Having you as a TA in freshman year and as a professor in senior year has been incredible! Thanks for making all the difference and being the reason I chose a new minor in philosophy.”

“Sometimes Alex starts off with some lecture to give us context for what we’ve read and what we’re going to talk about. He’s a charismatic, energetic, and truly wonderful teacher and professor. The group dynamics he have set up feel safe, comforting, and encouraging for everyone to continue talking and state their thoughts, and I who normally hate participating find it easy and fun to do in this setting. This is a perfect example of what a philosophy class should be like. Alex answers questions rarely; he instead directs us to lines or concepts in our readings and asks us to think on the answer ourselves, which has always worked so far. Instead of our discussions being fumbling around in the dark, we are given a direction to share our thoughts in. In the latter half of the class all of the small think tanks get together and start talking about what they’ve discussed, and we work out our “philosophical knots” together. It’s such an enlightening and fun class. I can’t even describe how great Alex is. He’s an ineffable amount of good.” 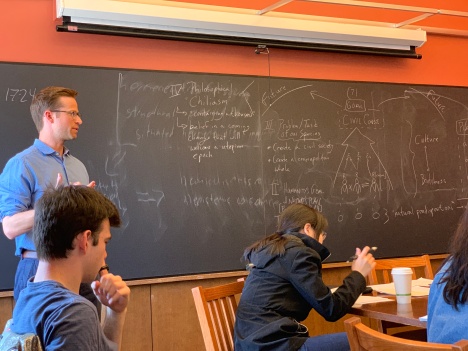 Below are some syllabi that I have prepared.  Beyond these, I have others that I am happy to share upon request and which I list at the end of each section.

In this course, we will become acquainted with some of philosophy’s foundational questions by exploring three topics: love, death, and technology.

What is the good life?  What should we do?  And why be moral at all?  Through historical and contemporary readings, we explore these foundational questions in ethics and meta-ethics.  At the end, we turn to topics in applied ethics.

This course offers an overview of philosophical thought in the seventeenth and eighteenth centuries, focusing on fundamental questions in epistemology, metaphysics, and theology.   In particular, we will be exploring topics such as: the nature of the soul, personal identity, free will, knowledge of the external world, the nature of space, classical social contract theory, the value of humanity, and arguments regarding God’s existence.  We will discuss Descartes, Locke, Hume, and Kant, with somewhat less time devoted to Leibniz, Elisabeth of Bohemia, Catharine Cockburn, Anne Conway, and Berkeley.

A seminar in which we explore the nature and use of ideals through analyses of dystopias from pop-culture and literature and utopias from the history of philosophy (with a focus on Plato, Kant, and Nietzsche).

This course is a close study of Kant’s Critique of Pure Reason, which is one of the most influential philosophical texts ever written. We’ll be considering Kant’s attacks on his empiricist and rationalist predecessors, his transcendental theory of experience, his metaphysical view of the natural world, and his account of the limitations on human reason.

Kant’s theory continues to influence how we think about ethics. He argues for the freedom of the will, for a duty that binds us no matter who we are, and for a rational faith in God. We will be exploring two of his major works on ethics in which Kant works out his arguments for these positions. The first is his Groundwork of the Metaphysics of Morals. The second is his Critique of Practical Reason. While a course on Kant’s theoretical philosophy is a helpful precursor, it is not an absolute requirement for participation in the course.

Beside the Phenomenology of Spirit, the Science of Logic is Hegel’s most influential work. In this course, we will be focusing on the last part, which Hegel refers to as “The Doctrine of the Concept” or “Subjective Logic.” In particular, we will be studying the moves in which Hegel unpacks the pinnacle of his entire system, namely, the absolute idea. 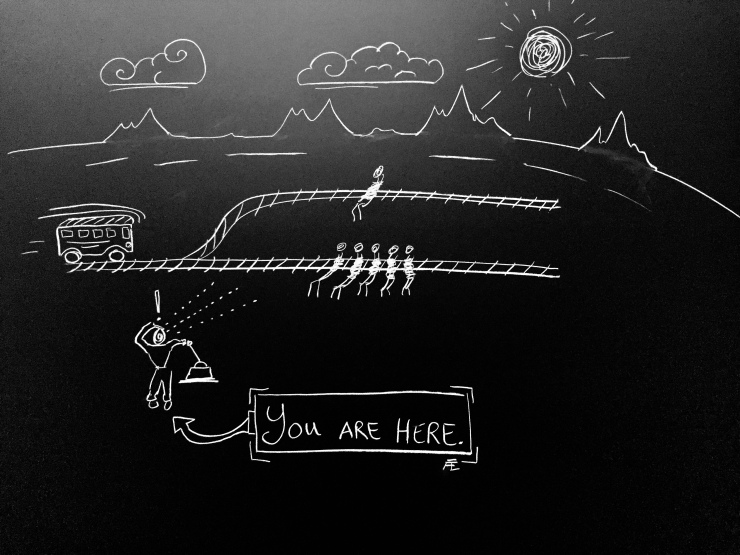 PREVIOUS COURSES AS SOLO INSTRUCTOR (Click on title for Overview of Evals.)

The Good, the Bad, and the Guilty at Johns Hopkins University ~ Winter 2016

If there are any former students out there who have stumbled onto this site and would like to get in touch, I’d love to catch up and see where life has taken you!  Reach out here.